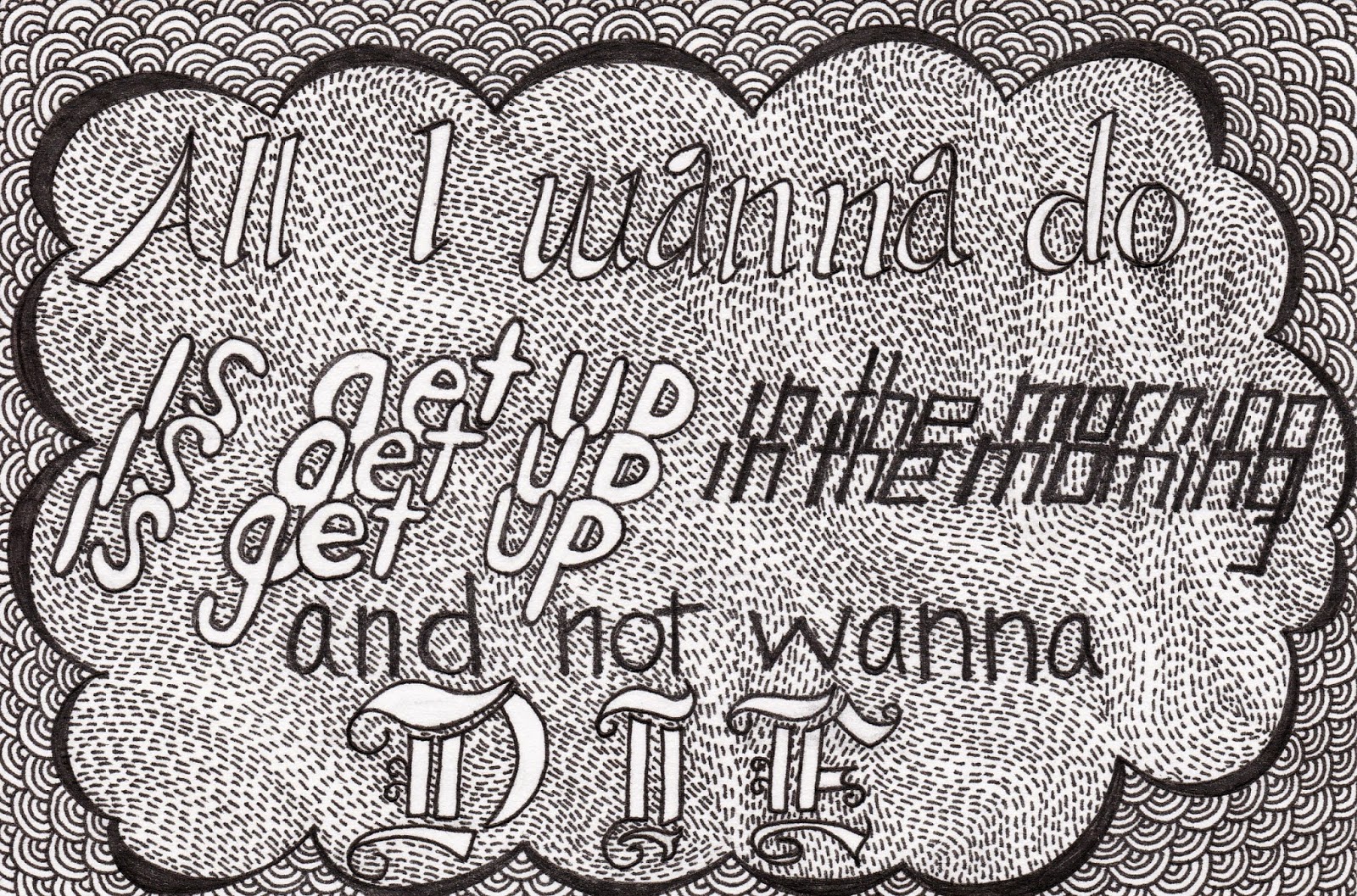 You have one day left in your whole life, what's the music you would listen to?  We're not talking the 1,000 Recordings to Hear Before You Die, I'm saying that if you knew you would be dead at the end of the next 24 hours, what would you need to hear?  Freak out with me, after the jump.
I've been doing this logotherapy workbook, because life is meaningless and we're all going to die, and one of the tasks is to take two minutes and write down six goals you would have for the next 24 hours if you knew that you would die at the end of those 24 hours.  So I'm driving in my car when a thought pops into my head: If you knew that you only had one day left to live, what music would you listen to?

Then I had a panic attack.  I haven't had a panic attack since I was in college and sitting in art history class thinking about how useless of a major art was.  I then made three minutes of a hilariously wandering voice memo (it's worth a listen) and now here I am.  I linked a bunch of songs via Spotify, but I also made them into a single playlist, if you're interested.

What would it be!?  I consulted my Listography: Music, in which past me was not helpful in answering this question.  Something new?  Something comforting and familiar?  Something angry?  Something sad?  Something beautiful?  Something to party by?  My obsessive compulsive personality disorder really wants to put a bookend on this thing by having the last song I hear be the first song I heard as an infant.  Things like Rusted Root's "Send Me On My Way" and Blue Öyster Cult's "Don't Fear The Reaper" are a little too on the nose, right?  (By the way, I love this version of "Don't Fear The Reaper" by Caesars.)  I don't think I could embrace anything future oriented like Kacey Musgrave's "Follow Your Arrow," despite how much I love that song.  I can only imagine that there would be some variation in these questions and answers depending on the manner of death and my age or contentment at the time.  Without falling too far into those holes, here's my gut answer, on this day, in this moment:

It would be all the beautiful things.  All the gorgeous, stirring things, the songs that curl up in the pit of your stomach and die.  Because those are human things and if I'm going to leave humanity, I want to be immersed in the experience of my human body for one more day.  I think I would also want to be alone, I wouldn't want to listen with other people, I don't think I would be the person trying to see people for one last time.  I would listen to this stuff and I would write them letters, make them art.  Now I have a playlist on my computer called Die Pack (get it, like dye pack? Sorry, I can't help myself out of word play) just in case I need to reach in and pull something out.  A mix of albums and individual songs, the playlist currently clocks in at less than seven hours so I have plenty of room to grow.

I imagine that the time would start upbeat and then slow way down by the end.  To that end, I think I would start with Girl Talk's All Day so that I could do like this series of videos and dance the whole damn thing.  Throw in some other dance-y faves like Robyn and the Archies.  I'd probably try to keep the uptempo thing rolling with some punk (Ramones, Sex Pistols, The Clash).  Then I'd get my Cat Steven fix by watching my favorite movie, Harold and Maude ("Trouble" and "If You Want to Sing Out, Sing Out" being standouts).  Keep with that mood a little bit and go for some Patrick Watson, Sam Cooke, and the Grateful Dead's American Beauty because "Sugar Magnolia" is my namesake.  Then, time to raise the energy again with Japandriods and Andrew WK (again, "Ready to Die" is too on point, right?).  K'Naan (the one two punch of "Hurt Me Tomorrow"-- so apropos! and "The Sound of My Breaking Heart") and "Seasons of Love" would probably be a great segue into some deeper mope-tastic music.  Tracy Chapman, too?.  Oh, and I couldn't pass up one last chance to hear Jeff Buckley slay "Lover, You Should Have Come Over."

Let's lean into it, deep.  Let's get so, so sad.  I'm thinking some Nada Surf is going to be in there and that Kishi Bashi creation and destruction myth, "Bittersweet Genesis for Him AND Her."  For the last decade, my holy trinity has been Ryan Adams, Clem Snide/Eef Barzelay, and Bright Eyes.  Little in this world makes me as aware of my own heart as Lifted and I'm Wide Awake It's Morning. Because it's perfection, I want to hear the entirety of Heartbreaker.  A strong smattering of Clem Snide, which would have to end with "Nick Drake Tape" so that then I could listen to Pink Moon by Nick Drake.  That Aphex Twin piano piece would nestle in next to that and then Radiohead.

Almost done.  It could only be Transatlanticism by Death Cab for Cutie.  Something about where Ben Gibbard was at that point in his creative trajectory connects deeply to me (see also, The Postal Service).  Transatlanticism is best taken as a whole, in order-- the tracks bleed together and the natural wax and wane of the sounds feels like the album is breathing.  I would need to spend time with Neutral Milk Hotel, because, yes, how strange it is to be anything at all and I need to remember that (or maybe I just need more time with my logotherapy workbook).

But the end. The end!  It would have to be "Do You Realize??" by the Flaming Lips (which I already wrote about in my #listeningtoallmycds adventure).  A gorgeous rendition of 'everyone dies but now is beautiful' would be the wave on which I want to go.

Things are definitely missing from this list. I need to get some 60's girl groups (the Crystals, the Shirelles, the Supremes, etc.), silly 80's metal, more "Moonlight Sonata," more beautiful sadness, more "Stephanie Says," more music to make out by, more soul (always more soul, right Otis?).  This is an absurd question, what an impossible task.  The tunes to carry with you and through your last day . . .  I would try to suck down all the beautiful, fun things because I think that's at the core of a human existence.  But, as my rambling voice memo noted; anything I forgot won't matter, it's not like I'll have the luxury of regret.  While I still have time, what am I missing?

P.S. You should also check out this piece that Robin Hilton wrote over at NPR Music.  It's the opposite of this and it is about first music his newborn son heard.