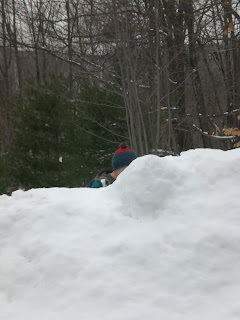 I don't know how Canadians do it.  Because I consider myself to be pretty hardy, but sometimes. It's just. fucking. cold.  Learn how cold, after the jump.
I know that picture is deceiving, but I'm not talking about snow.  That's my Mom, by the way.  They had a bit of snow for the season.  But I'm not just bitching about winter and snow.  It's winter, it's perfectly acceptable to have snow.  And, in fact, I am of the mindset that if it's going to be cold, you might as well be able to ski in the twinkly picturesqueness of it all.  So I don't mean, "BOO HOO IT'S COLD IN JANUARY BLLLLLEEEEEEEE."  No.  I mean, that we had three days in a row where it wasn't above 5 degrees Fahrenheit and seven days in a row that it hasn't been above 10.  That is some crazy bullshit.
While I adore my tiny car that goes goes goes all the time, despite problems with the check engine light for the past 5 years (cue jinxing blow that ruins car forever), it's never been so cold my car wouldn't start.  Well, once I had to go out and try again after 5 minutes, but then it was ok.  But, that's a real thing.  Less so here in New Hampshire, but loads of places in Maine and Vermont you see plugs hanging out of grills so that people can plug in their car heaters and keep the engine from seizing due to the cold.  Also, those heaters are mice breeders/incubators.  But, that goes back to that garage issue.  But, back to how this is about me.  My car always starts (Honda Civic Salvage 4 lyfe) but other people do that that problem in this area.  And like . . . when it's too cold for machines and robots . . . you have to wonder why people bother being hospitable to this area.
What kind of cold am I talking about?  I'm talking about when you open the door and immediately you can't breathe.  You don't even feel the air get sucked out or frozen in or wherever the fuck it goes.  You're just done breathing because you're so stunned.  Likewise on your skin.  You don't get a blast of cold air, you just immediately feel like there is a hypodermic needle of liquid nitrogen in every single one of your pores.  When you leave the house with wet hair it turns into stringy daggers that clink together when you move your head.  It's the cold of snotsicles (exactly what you think).  Sigh.  It's so cold it's immediately miserable, but also a tinge exciting because, it's. so. fucking. cold.  Adrenaline.
"Go to Florida!" They say.  So, here's the thing about that.  No.  It's too hot in Florida.  "Oh, but everything's air conditioned!  So you don't even notice."  Ok, first of all?  You can't tell me you go to Florida to escape the cold weather when everything here in winter is heated.  Your argument is invalid.  Second of all, on some level you're right.  It's warmer in Florida, can't argue with that.  But I choose cold.  Because when it's cold you can put on loads more clothes or nice, warm, snuggly ones.  When it's hot you can't take off your skin.  It's apparently a control issue for me.  Have we talked about my obsessive compulsive personality disorder lately?
In summation: It's cold out.  I pick cold over hot.