The Garage: Everything but the kitchen sink

This is a picture of an actual garage.  The garage is, in most cases, an essential and quintessential piece of the bucolic lifestyle.  We shall examine the incredible clowncar-esque storage capacity of the garage and the bizarre nature of what lays behind those vertical sliding doors. 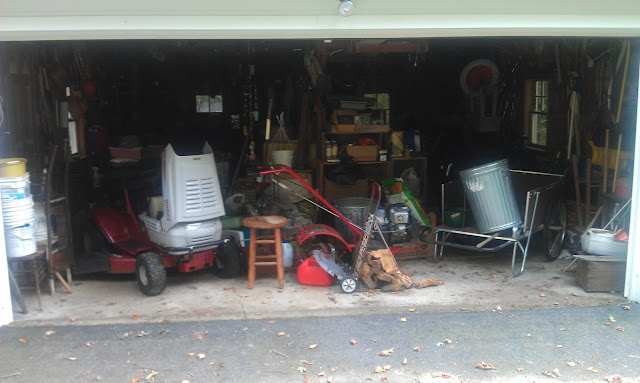 The analysis after the jump.

As is obvious at first blush, the cars are not in the garage.  This phenomenon puzzled me as a child . . . garages are for cars, right?  Alas, in the great northern country, when you leave your car in the garage you are typically gifted with multiple mouse infestations in the general region of your engine block (because after you carry in the groceries, the warm and snug call of the cooling engine proves to alluring for wandering mice to pass by).  From what I understand having heard tales of this event, it usually ends up as badly as you can image; mice running around eating your car (sometimes while you are driving) or cooked mice and whatever they scrounged for a nest under the hood.  Plus, aside from the mice, when you have all this stuff, there's just no room left for a vehicle-- Save the occasional snow machine or atv.
In the first layer you can see a riding lawnmower (it's electric, which is why the top is up, it's charging), a rototiller and the gas to go with it, a handcart, various buckets and trash receptacles, a myriad of chairs and stools, and countless other odds and ends.  Odds and ends are central to a garage.  What else is in there?  What you can't see is another lawn mower (of the push variety, because of the tricky terrain in the yard), a chest freezer, about 50 baby food jars filled with nails, nuts, bolts, and screws, skis, ammo, highchairs (yes, more than one), planters and soil, windchimes, loppers, mauls, axes, an ice chipper or two, a croquet set, coolers, hats, snowshoes, bikes, shovels, paint, and God only knows what else.
Let's backtrack for a moment.  A chest freezer is pretty standard fare, many people have them to keep the various food they've harvested (read: deer shot, pigs slaughtered, chickens axed, blueberries picked, beans snapped, etc) and buy things in bulk, as well as store things just not meant to be stored in your average kitchen freezer (like a turkey carcass before its turned into stock).  It is also customary to keep ice or water jugs in the freezer to preserve the cherished payload in case of power outage.  Recently, my mom picked up one of these jugs as she was moving things around in the freezer and realized the bottom was brown with oil.  She assumed that oil was leaking from the freezer motor and upon further inspection, she realized that all the jugs, even those on the opposite end of the chest, had bottoms silken and brown from the ooze of oil.  A mystery!  The case was solved by some ingenuity on the part of my mom and google: the polymer in the 20 some odd year old jugs had destabilized after been frozen for so long and the . . . who knows what . . . was leaching from the jugs.
The incredible collection that is the garage never ceases to amaze and it is certainly a catchall.  Questions are often answered with, "I don't know, maybe in the garage . . ." and bizarre requests are often filled by, "Oh yeah, it's in the garage."  Everything is in there.  It's just where I would want to camp out in a Zombiepocalypse.  It's everything but the kitchen sink, though as the husby pointed out, not 25 feet away . . . is the sink.  I think my mom plants flowers in it. 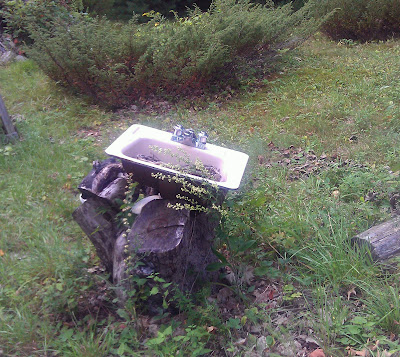