Don't Punish Your Kids, Teach Them a Lesson 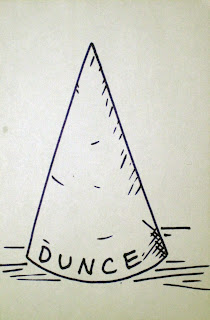 Consequences can be hard to set and difficult to stick to.  Rewards work even better. Remember how we talked about not being a bitchface to your kids and how to only say things once?  Let's continue your education about how to be the magnificent parents other parents envy.  Set forth, after the jump!

DAD:  She [any kid 6-14] just doesn't get ready for school in time, she's always late to school because she's watching tv instead of getting dressed.
ME:  Ok, so I want you to give her a 10 minute warning, and if she's still in her jammies when it's time to go, you need to take her to school in her jammies.
DAD:  No!  That's absurd.  What will people think!?  People will be mean to her!  It reflects badly on us as parents!
ME:  I'll be really surprised if it happens more than once.  You're showing her that she needs to be at school on time and that the state she shows up in is up to her.  It also reflects badly on you that your child is late to school every day, so let's fix both problems really quickly.

Ok, obviously, for some kids that isn't going to work great because they'll love going to school in their jammies.  To which I say, pick your stupid battles.  If things are truly inappropriate, then you need to teach the need for appropriate clothes.  If you're just concerned about the fashion statement, get over yourself and go take a bubble bath with all the free time you just made for yourself, because that's you caring about your problem with the situation, not you caring about your kid's problem with the situation.
The moral of the story is this: plan for rewards and consequences.  If teeth brushing in the AM is always a struggle, make a cookie at lunch contingent on brushing!  Or make it so that when they go three days in a row with brushing their teeth they get to pick what's for dinner.  But plan.  Try your level best to tell kids what they should be doing, rather than directing them away from what they shouldn't be doing.  Don't make things last too long or else kids have nothing to hope for and will be dreadful.  Swallow your own pride and give kids guidance, but let them learn for themselves.  Funny story to end on: Once upon a time I had a kid who started to run down the stairs.  "You need to walk on the stairs!" I said.  The child plowed down the first few stairs and I found myself impressed, thinking, oh, maybe he's totally got this!  Naturally, as I thought that, his body weight shifted and I watched the disgraceful plummet he took down the entire second half of the stairs.  He smashed into the wall at the bottom of the stairwell, eyes wide, and he stared at me.  "You ok?" I asked.  I didn't suggest anything could be wrong.  Didn't rush to aide him.  He stood up, took stock, and nodded affirmatively.  "Ok, that's why you need to walk on the stairs," I said.  Kid never ran down the stairs again.  He also had a concussion.  No, no he didn't I'm just kidding, he was totally fine.  Never even cried.