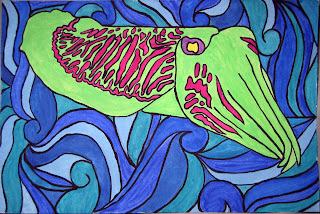 A daily art card from a week off.  No clients, no phone calls, no paperwork, no treatment plans, no meetings, no getting up early, no lack of time of cooking.  Yes reclining couch, yes Jack Daniels, yes baking, yes television friends, yes new music, yes Martha Stewart, yes running, yes crafting.  Bring. It. On.  The amazing adventures of our tiny apartment, after the jump.

Here I sit.  The end of my era . . . the last day of my vacation.  Vacation?  They asked.  Where are you going?  They inquired.  My couch!  I proudly proclaimed.  People were confused, though it should be noted that my coworkers seemed knowingly envious, why wouldn't you make plans to do something with those extra 40 hours?  Because . . . I do plenty.  Sure, I could always do more, who couldn't.  But, I do plenty and what I really want to do is sit on my ass and watch the hours and hours of my beloved television friends clogging up our DVR.
I drank lots of tea.  Ok, so it's been crazy warm for some reason (50 degrees!?), but it's still January.  So I drank lots and lots of tea.  I have a gorgeous teapot which was a wedding present from a friend who hates to make teapots.  I get my honey from a terrific apiary in Deerfield, Mass (though, only until I get a house and my own sweet little ladies) and my favorite is the goldenrod honey.  I get my tea from Harney & Sons and they has so manys yummies!  I made so, so many pots of tea and hunkered down into the warm fuzzies of the couch.
I ate breakfast.  Like, real breakfasts.  Eggs, bacon, rice pudding, salted toast, fruit, yogurt, the whole nine.
I went running!  Outside!  In January.  And, full disclosure, I only managed about 2 miles, but I did it!
I watched so much tv.  I watched the entire run of Friends.  I grew up in the 90's and yet somehow managed to completely miss Friends.  I always just thought it was stupid.  And it is, but turns out, I bought right into it and sucked it all up.  I watched 30 Rock, The Big Bang Theory, The Mentalist, CSI (all varieties), Being Human, Once Upon a Time, The Finder, SVU, Suburgatory, NCIS, Glee, Criminal Minds, Up All Night, Family Guy, Mythbusters, Iron Chef America, White Collar, Parenthood, Royal Pains . . . and so on and so forth.  Yeah, that's right.  Some of that might have been more than a year old, so . . . don't judge.  I told you it was cramming up the DVR.
I baked.  I made full and complete dinners.
Most days, I didn't get out of my pjs.  So, win!
I got to make art.  I worked the hell out of my daily art cards.  I made extra spicy nice ones, because I took lots and lots of time on them.  I also made fabric covers for our blah kitchen and it really jujed up the place!  Ok, not the best picture, but don't begrudge the idea and execution.  I got my sewing on!  I also made a cover for my ugly rubber storage drawers. 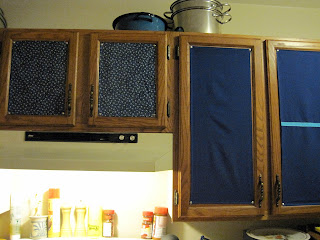 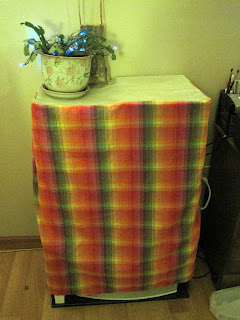 In summation . . . I don't think I could have enjoyed myself any more.  Even if I had been on the beach in Oahu . . . it wouldn't have been as satisfying as being nestled into my own place with all the familiar amenities of home.  I didn't worry about my clients (thank you, Emergency Services team!) and I completely relaxed.  Free of charge, no less!  Plus, the husby enjoyed the baking.  And the kitties enjoyed the snuggles. 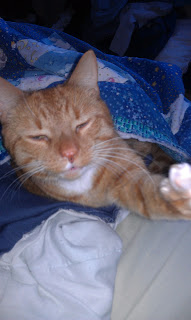