Neurobiology of the Night Owl 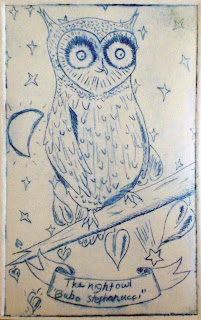 I'm a night person.  I'm the antithesis of a morning person.  Let's talk a little about why that might be.  Whether you're a night owl or a morning lark, this applies to you.  Learn some neurobiology, after the jump!
When I first started my 8am to 5pm (ok, or 7pm, or 8pm) job, I was dying every morning getting to work by 8am.  After complaining to my Mom, she made the reasonable point that I had been used to getting up later for years, so it would probably take some time for my 'internal clock' to adjust.  Well, it never adjusted and when people didn't show up for 8am appointments I was livid and fuming because I could have been at home sleeping another hour, you bitches.  I have always been insufferable in the morning. I barely make sounds, I yell at everyone for everything.  If you woke up me up at 6am and told me if I got up and went running you would give me 5 million dollars... I would tell you to fuck off and have to seriously think about your offer (which you probably wouldn't give me anymore because I had been a dick to you and which I probably wouldn't seriously consider because, 6am).  I'm the person who is unphased by daylight saving time clock changes.  On day two of my vacation I go back to sleeping 5am to noon- that's the sweet spot for my internal clock.  I've never been like my coworkers who don't even have to set alarm clocks because they 'just wake up' at 6am everyday (which sounds like hell, by the way).  Let me tell you about what runs your 'internal clock'; the suprachiasmatic nucleus (no, spell check, I don't mean uncharismatic, though it does make me that way).  I hope you don't mind, I'm going to call it the SCN.

I bet you didn't even know you have an SCN, it doesn't get much play in pop culture or science class and it's actually just two little blobbies over by your hypothalamus.  But your SCN is a deciding factor in your sleep cycle, your behavioral patterns, and physiological patterns over the 24 hours of a day.  Scientists have now found that the SCN is influenced by light and appears to control the biorhythms of pretty much everything in your body; sleep length, sleep time, hormones, body temperature, and aspects of mood (usually due to one of the former).  When the SCN is damaged, your body still does all of those things, but it doesn't do them as well or in a timely manner.  In summation, the blobbies are important.
Like everything in puberty, the SCN goes a little bananas and thus, teenagers stay up all night.  Also during that time it changes differently in males than in females which is why night owls tend to be men and women tend to be morning people.  The SCN also changes as we age and sleep patterns often change later in life so that people wake earlier.  When you're out camping for a few days and don't have much in the way of artificial light, your SCN is why you (even the night owls) start going to bed and getting up with the sun.  Your optic nerves send messages right on back to your SCN blobbies.
Ok, but what actually makes someone a night owl?  Think of a bell curve for a moment; while the 'normal' cycle is that traditional 24 hour circadian rhythm (the folks under most of the curve), one end of the curve are the night owls (they have a shorter circadian rhythm) and at the other end of the curve are the morning people (they have a longer circadian rhythm).  The cells that dictate the functioning of my entire body don't work right in the morning.  It actually has very little to do with the amount of sleep that I get; I feel better after sleeping 5am to 10am than I do after sleeping 10pm to 5am.  If I need to do something at 4am, I would rather stay up and greet it prior to sleeping, than go to sleep and get up for it.
Those natural cycles of my body are different than those of a morning person.  When I would drive back and forth between New Hampshire and Indiana, I discovered that I would be sleepy between 10 and 10.30am, 2 and 3pm, 7 and 8pm, and 1 and 1.30am.  Those bouts of sleepy were mild and indeed, I don't tend to notice them when I'm having a normal day when I'm not hyper aware of whether or not I'm going to fall asleep at the wheel of a vehicle.  However, those dips in energy are due to natural waves in hormones and functioning, controlled by the SCN.
In a sense, we're stuck with this, but some patterns can be changed.  Why bother to alter your patterns?  For starters, we live in world mostly driven by the morning people among us.  I could never have my job as therapist if I kept the hours I wanted instead of the hours my agency is open for business.  I did, however, stop making 8am appointments for my own sanity as well as for the well being of my clients.  Let's develop a little empathy for one another.  If you're a morning person, imagine that you've been up since 5.30 this morning and it's now 11.30pm.  I then insist on debating a hot button issue.  You'd be pissed.  You'd want to engage with me, but you're just grumpy, illogical, and want to go to bed because you've been up since 5.30, damn it!  That's how I feel every morning and when you're looking to debate that same hot button issue after a good night's sleep because you're fresh and ready to face the day!  But I'm just grumpy, illogical, and want to go to bed because it's early, damn it!  So, please leave me the hell alone until late morning and I will let you go to bed when your day has run its course.
For a lot of people, light therapy helps change the patterns of the SCN.  Even simple changes, like keeping the shades open, helps a lot of people.  Plus, knowing that it's biology can be helpful, too.  Don't blame yourself or beat up on yourself.  If you go to bed at 9pm but never fall asleep until 11pm, go to sleep at 11!  If you're awake anyway, don't lay awake in bed thinking about how you should be sleeping, that's just unhelpful.  Respect your own limits, coax out some small changes from your SCN, and honor the waves of each others suprachiasmatic nucleus.