Moose Are a Reality 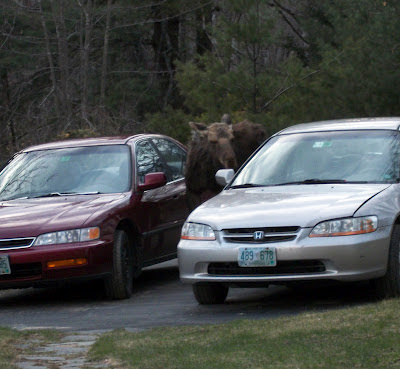 My college roommate and perennial friend from Arkansas, Abby, believes that moose do not exist.  The proof, after the jump.
So, Abby believes that moose are completely fake and made up only to drive up tourism in the Northern Woods.  She has a point . . . moose tours are quite the business and thousands of people plunk down as much as 100 bucks a person so that they can be taken on a bus way the hell up into the woods with the hopes of seeing a moose.  In Abby's defense, it would be in our favor to continue to have sightings in order to prove the existence of moose.
Sidebar.  I have never understood those giant road signs we have here which say "Break for moose, it could save you life".  Who the hell do you think you are if you are going to see a giant, solid, beast standing between you and where you're going at 55 miles per hour and assume your Chevy is going to vaporize it.  WHOTHEHELLDOYOUTHINKYOUARE?!  Because, clearly, it's something super-human or super-automotive and you should get checked for psychosis.  I see a good sized squirrel in the road and I don't assume my car can take it.  I recall driving on a school trip down the road and then all of the sudden seeing this guy on a bike, debike sloppily, and sprint across the road whilst glancing over his shoulder.  The driver of our van slowed to a stop and put on the flashers, lest this maniac run out in front of the van again (see?  It was only a person, not a moose, and our driver still thought it would be a good idea not to hit and/or attempt to vaporize him).  Silence.  Nothing.  The man stood panting and hunched over.  A van feel of teenagers with baited breath.  Then . . . an enormous moose emerged from the woody underbrush and strolled swiftly across the road before disappearing into the inky shadows of the forest on the other side of the road.  I can only imagine the thunderous thrashing and God only knows what else that cyclist heard coming at him which made him fall off his bike and run across a major road with traffic.
Some people live in the Northern Woods their whole lives and never encounter moose.  They are seen rarely in summer, so it really perpetuates the idea that us locals make up this crap and the summer people never see 'em.  But, come fall and spring, if you're heading through a swampy area or just making your way home from the country fair . . . you just might see one.  Abby is convinced that pictures of moose are in no way proof of their existence, because they are merely created to fuel the moose tourism industry which all locals are in on.
This particular picture is courtesy of my Mom.  This little guy (that's right, little.  As in, this isn't a big one) showed up to lick the salt off their cars.  Another sidebar: I once met a woman who had seen pictures of moose and know of them, but assumed they were the size of large dogs.  Naturally, as soon as my Mom posted it on facebook, Abby commented that it was photoshopped.  : )